Is Love Moschino and Moschino the same?

by mysmallstore
in Brands
3
8.3k
SHARES
8.3k
VIEWS
Share on FacebookShare on TwitterPin us!

To answer the question is Love Moschino and Moschino, the same.

My answer will be French Normandy style: yes and no. Happy with my answer? No? Let’s see why I can’t give a straight answer.

What is Versace Jeans Couture?

Versace Fashion Accessories – Often a Must Own

Then again no, Love Moschino and Moschino are not the same because the customer base is very different, one for more affluent people looking for a more unconventional style, the other, younger and much less affluent looking for a known and more wearable designer brand Moschino.

Yet, I know many affluent customers who swear by Love Moschino.

Many claim that the difference between Moschino and Love Moschino is the price, and I can’t entirely agree.

Look at both pictures. The styles are entirely different, as well as the price and the material. The Moschino is 100% Silk with no branding – the design is the branding. The love Moschino dress is 95% Cotton, 5% Elastan with a printed, very noticeable brand – Is Love Moschino and Moschino the same, really not looking at the design! 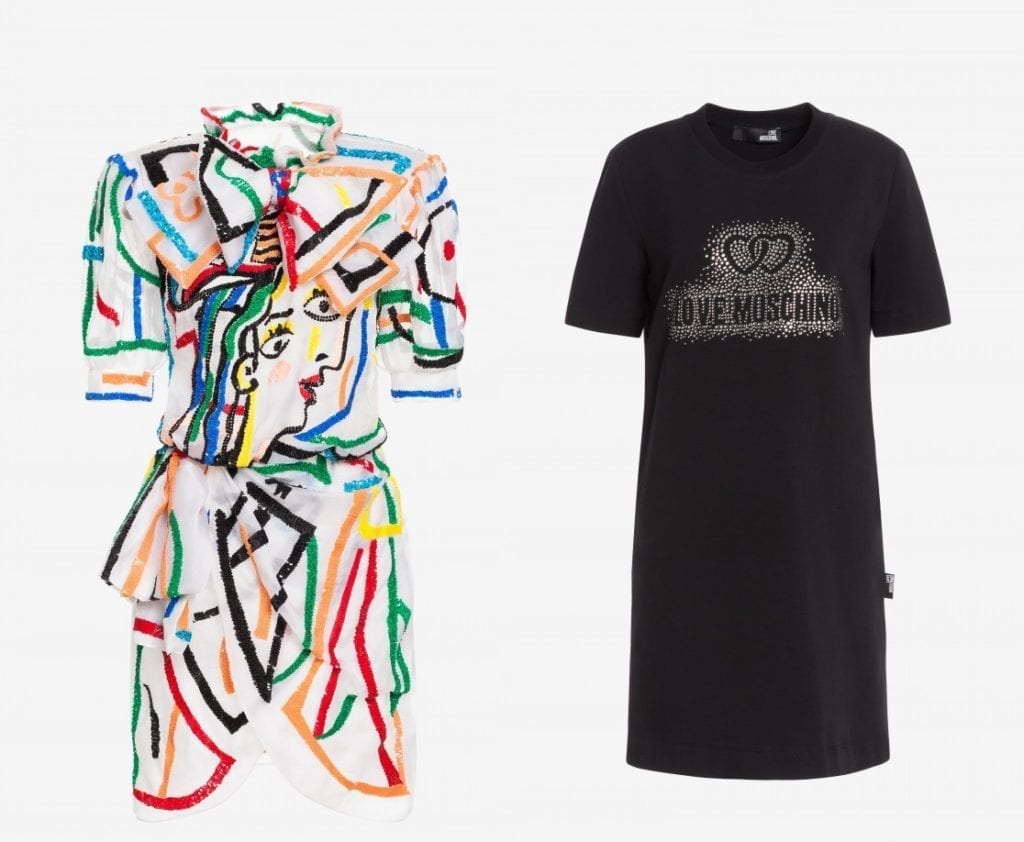 Think about yourself, which dress would you wear to a chic party? Which one for shopping?

Let’s look at handbags, the Face Print Clutch at $550 or the Clutch With Stars at $115, as for the dresses, one has a prominent logo, for the other one, the design is the logo. Same question as before: is Love Moschino and Moschino the same, really not looking at these beautiful handbag designs.

We could go on and on with this 😊

Now, do you think that the difference between Moschino and Love Moschino is “only” the price tag?

I know you are already asking about Boutique Moschino. This third line is also a diffusion line well placed between the two other lines.

Boutique is a bit more “exotic” than Love Moschino with a lower price tag than Moschino.

The final answer is that both lines are from the same fashion house with different designs and prices.  I hope I answered your question, is Love Moschino and Moschino the same.

Moschino was founded near Milan in 1983 by Franco Moschino.

Contrary to other fashion designers, Franco’s family owned an iron foundry. He wanted to become an artist painter.

He created casualwear and jeans but quickly extended to lingerie, eveningwear, shoes, menswear, and perfumes.

He was called the Jean-Paul Gaultier of Italian fashion for his highly creative designs.

Franco loved playing with statements like “Expensive Jacket” embroidered in gold across the back of a cashmere jacket.

He loved mocking fashion classics such as the Chanel jacket with very showy details making him quite famous in the industry he satirized.

Before his death, Franco worked to raise money for hospices for children with AIDS. He passed in 1994 at the age of 44 from AIDS ☹

In 1999 Moschino joined the group Aeffe created by Alberta Ferretti and include Philosophy di Lorenzo Serafini and Pollini.

What is Versace Jeans Couture?

Versace Fashion Accessories – Often a Must Own

What’s the difference between Versace and Versace Couture?

Is Michael Kors a Luxury Brand?

Sunglasses and My Small Store

This site uses Akismet to reduce spam. Learn how your comment data is processed.

No Result
View All Result

Stop Spending All Your Money On Luxury Bag

What We Love About Sulina Shop Reviews

Finesse Dead Sea, #1 Why we Love Them

How to Choose the Perfect Swimsuit

Why do we Love Buck Ridge Soap Company

How to Be Beautiful With Organic Natural Skincare

No Result
View All Result